The Double Door is one of those classic music venues in Chicago that almost seems like a stereotype – tucked beneath a train line, it could appear to be a graffiti riddled wall easy to overlook. Inside, it shows its age with darks walls, dim lights and the vinyl-gleamed stucco that old buildings brandish like tattoos. This place was made for music, and even though its location seems pushed to the side, everyone in the city knows and respects its reputation.

There couldn’t be a better location for Copeland’s Now/Then tour. A band who has never particularly been directly in the spotlight, they have caught the attention of the highest aspects of the scene, be that vocalist Aaron Marsh’s recommendation plastered on the cover of arena-rockers Paramore’s debut album or gathering powerhouse talents like Ace Enders and Kenny Vasoli to open for their (first) farewell tour.

The Now/Then tour is an ethereal experience that might focus on the “best of,” but it encompasses every aspect of what makes them such a unique brand. Their writing is nearly orchestral in arrangement, which lends to the fact that they’re one of the few musical acts that might actually sound more polished live than recorded. With a tour structured on working backwards through their discography, Copeland have shown not particularly their growth as a band, but how well-crafted their music has been since Beneath the Medicine Tree came out 13 years ago.

With the floor filled with talkative hipsters finding the happy medium between a light buzz and shouting conversation, opener Rae Cassidy took the stage. Armed with three violinists and a ukulele, Cassidy set right in, lightly plucking against the swell of violins. Her voice, bright and powerful, seemed to silence the crowd instantly, with a round of shushing sweeping the back of the room.

A mix of pop and indie R&B, her music was a perfect hybrid of someone who seemed influenced by Copeland’s softness, but embraced multiple genres to flesh itself out, unafraid to let the violins and gentle pauses lead the song. Though the music was soft, her voice was beautiful.

Standing center stage like a princess in a summer dress, she sang with command. I couldn’t help but think of a female Kenny Choi from Wolftron (and Daphne Loves Derby) with country and folk influence imbued with the purpose of Lorde. I was left wondering not only how I had never heard of her before, but also how long it would be before she became a household name.

While finishing her last song, Copeland took the stage, becoming her backing band while perfectly transitioning from her setlist to theirs. Their first song, “Not So Tough Found Out” (featuring Rae Cassidy!) suddenly became “Chin Up” as Rae left the stage, only to crop back up throughout the night to provide backing vocals. Her violinists remained on the side, adding to almost every song they played.

Split into two distinct playlists, their first set contained music exclusively from You Are My Sunshine and Ixora, including the version of “Ordinary” off of the companion Ixora: Twin album. It was a perfect ploy to lure back the drop-off fans, who listen to nothing but the “classic” albums. It’s easy to say that a band “doesn’t sound like they used to,” but watching them work backwards, it became obvious that Copeland has known their trajectory all along. It was fascinating to hear the crowd singing along louder with each song as they became more familiar with the material.

After an intermission, they returned to play from their better-known albums, In Motion and Eat, Sleep, Repeat. As expected, this set was much more energetic. Not only because the crowd as a whole knew the words to every song, but because it included the few pop songs with Aaron Marsh on guitar, including “No One Really Wins”. Paired against and after their new material, there was a distinct awareness of just how talented the band was in their younger years compared to their peers. Their first albums didn’t sound like a band finding itself, with singles that sound out of place compared to their current material. “You Have My Attention” stood out as it closed the set with Marsh hitting the perfect high note against the rapidly swelling guitars. 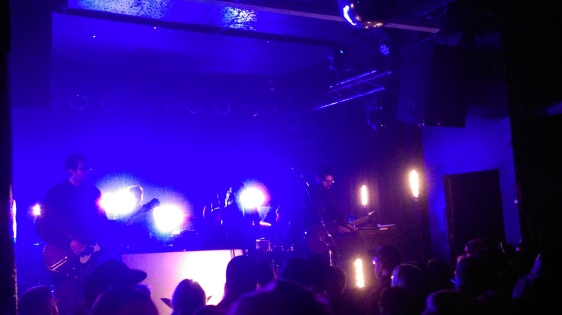 After stepping away for just a second, Copeland reappeared for their encore: a full six song set from Beneath the Medicine Tree, arguably their most famed record. Featuring “Take Care”, “When Paula Sparks”, “Coffee” and ending on the bittersweet “California”, the band melted the room into an intoxicating atmosphere of nostalgia and profound romance.

Now/Then is a simple, but effective concept that manages to blur the line between a greatest hits tour and a timeline of artistry that shows the complexity and craft of a band unlike anything else in their genre. They may be tucked away from the obvious, but they were built for this all along.

Kyle Schultz is the Senior Editor at It’s All Dead and has worked as a gaming journalist at Structure Gaming. He lives in Chicago and has now seen Copeland three times, twice awkwardly opening for punk bands, but holding their own. Aaron Marsh once hit the high note in “You Have My Attention” for what felt like a solid minute. He is for sure over exaggerating the recollection, but the crowd lost its mind cheering Marsh on as he tried to hold it as long as possible. Good times. Better than yours.