Pierce the Veil Explode on We Will Detonate Tour

A masked intruder enters the stage from behind a curtain, greeted by the screams of those in attendance at the Egyptian Room in downtown Indianapolis. As the anticipation builds, the masked man ignites a box labeled “TNT,” dropping the curtain and unleashing a wave of streamers and confetti as Pierce the Veil rip into rapid opener “Texas is Forever”.

It was just two years ago that the post-hardcore act from San Diego graced this very same stage as I pondered the extended wait for their fourth full-length album. That release came at long last in 2016 with Misadventures, an album that not only lived up to expectations, but deserved another full U.S. trek that has now arrived in the form of the “We Will Detonate!” tour.

But before we get ahead of ourselves, this tour is far more than a victory lap for Pierce the Veil, but also includes a band nearing the top of their game and another band that helped pave the way for the scene as we know it.

Since taking over as lead vocalist for Emarosa, Bradley Walden has been elevating the band’s sound to new heights. Last year’s 131 was a triumph, shedding the notion of what a post-hardcore band could accomplish by embracing pop sensibilities and handling its heartbreaking subject matter with sensitivity and honesty.

Before the opening notes of “Sure” can reach the back of the venue, Walden has jumped into the crowd, where he’ll spend a good portion of the band’s energetic set. Despite the somber tone of some of the band’s newer tracks, Walden and company ramp up the energy of the crowd through their performance. The crowd joins in on the vocal action during single “Helpless” and “Young Lonely”, assisting Walden, whose golden pipes require very little help in belting out every note.

Next up is Sum 41, whose 2016 album 13 Voices finds the band in a sort of resurgence. Although never truly absent from the scene, this collection of surprisingly aggressive material has seemingly breathed new life into the band, which shows during performances of “Fake My Own Death” and “Goddamn I’m Dead Again”.

Deryck Whibley has always been a joy to watch on stage, carrying himself like a true punk elder statesman. Transitioning from smirk to scowl, Whibley leads the crowd in sing-alongs as they rip through their set. Even though it’s a blast to hear new material, there’s still nothing quite like singing along to classics like “In Too Deep” and “Fat Lip”, which sound just as good as ever.

As Pierce the Veil explode into the evening’s final set, it’s easy to see why they remain one of the most electric bands in the genre. Per usual, their stage presence is on point with lead guitarist Tony Perry and bassist Jaime Preciado bounding across the stage amid flashes of light. Vocalist Vic Fuentes commands the crowd from behind the mic while his brother Mike powers the set forward from his drum kit, appropriately mounted atop a giant stack of dynamite.

Something that feels slightly lost in the buzz surrounding Misadventures is the fact that the band recently passed the decade mark, with their debut album A Flair for the Dramatic turning 10 years old this year. Placed amidst hits from Misadventures and Collide with the Sky, the band take time to play classics like “Yeah Boy and Doll Face” and “Stay Away From My Friends”. These moments serve as reminders that Pierce the Veil have been on the rise for a while now, and these older songs are still just as fun to sing along to as they were when the band were sweating out club shows in the late aughts.

Pierce the Veil continue to set the standard for this scene, not only in terms of inventive post hardcore, but with their dedication to extraordinary live performances. I’ve seen songs like “Caraphernelia” and “King for a Day” played countless times at this point, but it’s still a blast to see the energy the band brings to the stage show after show. If we’re lucky, our next wait for new music and another grand tour to show it off won’t last four long years. 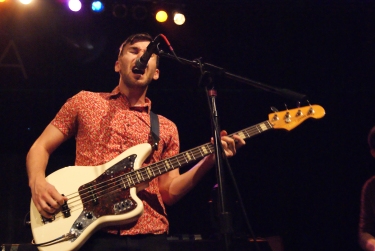 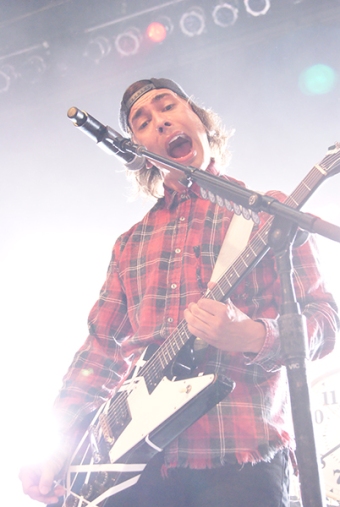 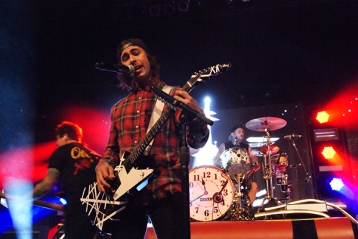 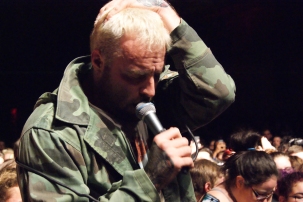 Kiel Hauck is the editor in chief at It’s All Dead. Over the past decade, he has been a contributor for multiple online and print publications and was most recently an editor at PopMatters. Kiel currently resides in Indianapolis, IN with his wife and their imaginary pet, Hand Dog. You can follow him on Twitter.